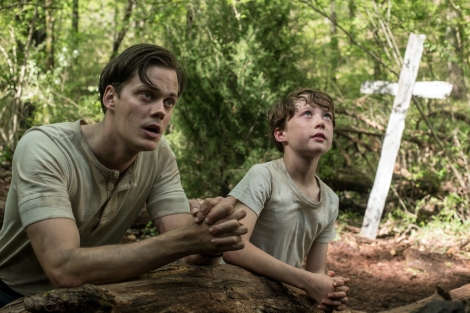 Plot – Set in the backwoods of America in the post World War 2 period, a group of local residents find their lives converging around religion, tragedy and love in their harsh and unforgiving surrounds.

“Some people were born just so they could be buried”

After a string of misses so far this year when it comes to original features, Netflix finally gets one right with the no doubt depressing but captivatingly put together adaptation of Donald Ray Pollock’s atmospheric dramatic thriller The Devil All the Time.

Set in the post war backwoods of America in the 50’s and then into the Vietnam centric 60’s, Devil takes us on a dark and depraved yet humanistic journey into the lives of inmingled characters whose various afflictions and trials in life converge in this harsh reality that is often seeped into the deeply religious mindsets of this era and place.

Directed by Antonio Campos who helped bring well-liked TV show The Sinner to life (a story that shares similar DNA to this crime filled yarn), Devil is drenched in intrigue and ominous vibes in what is a multi-generational tale that features some of the best talent working today, including an against type and hugely impressive Tom Holland as unfortunate soul Arvin Russell, an orphan who intends to protect those close to him and ensure justice is upheld for any wrong that may be done to them.

Initially Devil establishes us into the lives of Bill Skarsgard World War 2 vet and Haley Bennett’s young couple, raising a home and family in a dead-end part of the country but after tragedy strikes in some extremely confronting and disturbing ways early on, the focus then shifts to Russell and his life with his grandmother and step-sister, that is directed by the guidance they find from new local minister Preston Teagardin, played by a menacing and detestable Robert Pattinson.

There’s also Jason Clarke and Riley Keough’s unnerving couple, Mia Wasikowska and Harry Melling’s god-fearing husband and wife and Sebastian Stan’s local lawmaker Lee Bodecker for the film to deal with and arguably this is where Compos’s film at times struggles to maintain its focus but Holland remains from the moment he enters the frame the most integral and well-rounded feature of the film that is moving and emotionally charged even when its taking its viewers and characters into some unapologetically dark terrain.

So well known for clear-cut figures and everyone’s favorite web-slinger, its great to see Holland play such a multi-layered character like Arvin and his presence is a guiding light to such a depressing tale that will find its fair share of viewers that may not be able to take its full assortment of misery and misfortune but Compo’s and his cast have created a unique and unforgettable tale layered in trials and tribulations, and one of Netflix’s best offerings of the year.

Tough going but filled with memorable performances and an unforgettable post war setting, The Devil All the Time isn’t pure entertainment but it is essential viewing for those willing to endure its confronting subject matter and character development. 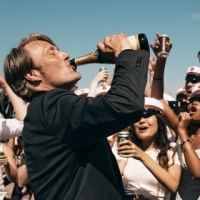 “Old age. It’s the only disease, Mr. Thompson, that you don’t look forward to being cured of”

Film For Thought
The UK Cinephile

Writing all the things.

My Year(s) With Gary

Cry Of Achilles
To Watch Next

Room For A Review

A blog about Film and TV, and anything related.

We Love What You Love