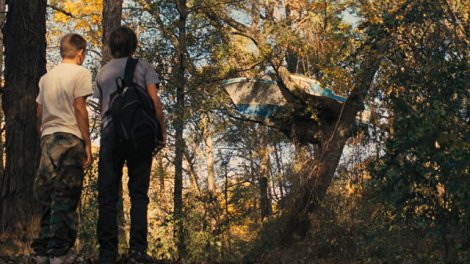 Plot – Ellis (Sheridan) and Neckbone (Lofland) are two young boys living a quiet life on the river in a small town in Arkansas. Their everyday life however takes a change when they happen across a drifting fugitive by the name of Mud (McConaughey) hiding out on a remote island bank. Mud enlists the boys into his life which involves his girlfriend Juniper (Witherspoon) and old acquaintance Tom (Shepard).

“You can’t trust love, if you’re not careful it’ll up and run out on you.”

I think it’s important to clear the air in regards to Mud first up so we can focus on what is a quality original film from one of the most interesting directors working in the industry at the present time – Mud is no American classic. Some have been forthwith in announcing Mud as a classic genre piece, a new masterpiece in the film library. This praise has heaped undue pressure and expectations on the film that if it doesn’t live up to it gets mighty close. What we have here is a truly original movie experience featuring some fantastic individual performances and a quite understated direction that gives the film a real sense of heart.

Much of Mud’s screen time is centred on quite 14 year old boy Ellis, who is wonderfully played by Sheridan from Tree of Life fame. Ellis Is dealing with the usual move into teenage hood all the while having to cope with his parent’s possible divorce and loss of his home on the river. Ellis spends much of his time with friend Neckbone, again played by a quality child actor in Lofland. When these two boys begin to deal with Mud things really begin to take off for them. Mud is a real enigma of a character but a fantastic one, a man that radiates charisma thanks to the work by McConaughey.

McConaughey has been in fine touch of recent times (if not for this movie one expects an Oscar nomination is already in the mail for his turn in The Wolf of Wall Street) and here is no different. Throughout the movie much mystery surrounds who or what Mud actually is, the audience like the two boys however trust in the character and this lies entirely with McConaughey’s ability to be both appealing and appalling in equal measure. It’s a fantastic turn by him and a memorable screen character that will go down as one of the year’s best.

All in all Mud is a great movie. What stops it from becoming a classic many have labelled it to be could be put down to a lack of emotions in certain aspects and the final 30 minutes undoes much of the simple understated work in the lead up with some clichés and logic defying aspects . My interpretation of Mud is that is essentially a film about love – in this respect it tells a much more true and touching story than many wannabe films trying to reach these heights. It’s refreshing to see a film as original as Mud, a film that will sit proudly and deservedly in many top 10 lists at years end.