John Dies at the End

Bubba Ho-Tep commences with dictionary definitions of the two words in its title; indulge me as I take a similar approach with the opening of this review…

John Dies at the End [john dies at the end] definition: 1) 2012 film directed by Coscarelli about two friends who whilst under the influence of a strange, alien drug called Soy Sauce are able to travel through time and space, and in doing so save the world from an imminent invasion from a parallel universe.

Finally getting its release in Australia (straight to DVD, but it’s better than nothing), it can safely be stated that John Dies at the End is every bit as bonkers as anyone familiar with the creative team behind it would expect. It begins with a flurry of genius, both in scripting and execution, and whist there are many lulls throughout, thanks to the charm of our two lead characters Dave and John as well as moments of unprecedented visceral imagination, ultimately succeeds in its quest for instant cultdom. A monster formed from the contents of a meat freezer, a door knob in the most literal sense, a hotdog cell phone and bodies imploding en masse; this is not a journey for the uninitiated.

When watching a murder mystery you can choose to either actively try to solve the crime following the hints the director is throwing at you, or just enjoy the proceedings  and wait for the final unveiling – by no means is this head-trip a murder mystery (although, actually, I guess it kind of is at the same time…) but I do advise taking the second option, as there is no room for logical analysis or problem solving allowed. Coscarelli has enthusiastically strived to provide his loyal audience with a work that is both similar and dissimilar to the Phantasm series, and his effort is commendable. Another contributor that deserves commending is the great Paul Giamatti (superb in everything he does, from American Splendour to The Illusionist), whose name has constantly been uttered in talks of a Ho-Tep follow-up, and here serves as not only actor in the wraparound segment of the plot, but executive producer also.

While I’m on the subject of actors, it was wonderful seeing The Tall Man himself, Angus Scrimm, stick to custom and make an appearance as an exceptionally bi-polar priest; his very presence easily worth half a star on the ratings scale.

Whether or not you enjoy John Dies at the End depends entirely on your tolerance of not having a clue what is going on, and even if you love being totally lost in strangeness it’s hard to praise this completely as its hit ratio is far from 100%. It remains, however, a dazzlingly fun experience and a cult extravaganza for the ages that furthers the reputations of all involved; now bring on that Bubba Ho-Tep sequel! 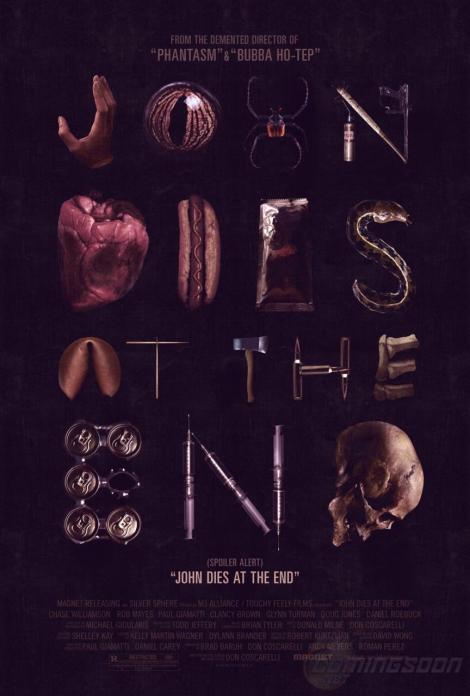