Plot – Despite a horrible first date and a strong hatred towards one another, single dad Jim (Sandler) and his family of girls find themselves on a holiday in Africa with single mom Lauren (Barrymore) and her two boys. Hijinks and romances ensue as the families are forced to be together more and more.

“I may have misread that situation”

We’ve all known it for quite a few years now but if you were under any illusions that Adam Sandler had given up the acting ghost and agreed to himself that he would do anything as long as the money is good and material lame and predictable, then you need to watch Blended. Blended is a movie so devoid of any reason for existing other than to prove a point (and give Sandler another paid holiday) that in the past was not fact, as much as Sandler has given in to the lowest common denominator, it’s safe to say now also that audiences have given up on him.

Blended was one of Sandler’s lowest grossing movies in years (barring his smaller “dramatic” movies like Reign Over Me and Punch Drunk Love) and it showcases that his once ardent following has tapered off, no doubt drained of seeing him play the exact same character over and over again and seemingly look to make sure he gets a nice vacation as the movie films. It’s actually in a weird way sad that Sandler has become who he has as an actor, the oddball charm he once possessed in unquestionably immature comedies like Happy Gilmore, Big Daddy ect ect is virtually non-existent now and even teaming up with his lucky charm Drew Barrymore and Wedding Singer director Frank Coraci does nothing to change this.

Where the Wedding Singer was a charming delight and 50 First Dates funny and heartfelt, Blended is cold, uninspired and forced from beginning to drawn out end. Barrymore has fine comedic timing and she has small moments to showcase that here but her chemistry that was so good between herself and Sandler previously is devoid of personality here. Jokes in Blended feel signposted throughout, the growing relationship between Barrymore’s Lauren and Sandler’s Jim takes forever to get going and once it does it feels rushed and uninteresting and all other many varied side plots the film throws into the mix are typical Sandler fluff from playing baseball, riding ostriches and Shaq cameos, nothing that happens here feels fresh, even the films adventure to Africa is just a total by-line – there is seemingly no point in even being there. Oh but I can see giraffes!

Too long, to lame, too predictable and well too Sandler, Blended is a dire comedy that is saved only by a few cheap laughs that are all types of random (rowdy Indian lady anyone?). Sandler has lost his mojo and he needs to get it back fast but with material similar to this so called romantic comedy, that mojo is going to be mightily hard to find. 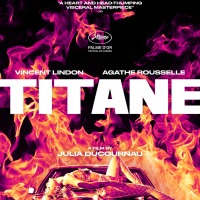