Yep, Cage is pretty happy right here in his action flick The Rock

While there is little doubt about that fact that now days Nicolas Cage is very much an actor for hire (supposedly due to some outstanding taxes) there was a time when Cage was one of the biggest actors in the business, an Oscar winner that also garnered some huge box office receipts the world over and a performer at home in big budget action flicks as well as small scale comedies.

During the mid to late 90’s in particular Cage appeared in many hits that flowed into the new millennium and then plateaued in the late 2000’s. Many pundits predicted a renaissance of sorts when Cage almost stole the show in 2010 cult classic Kick-Ass but sadly that has yet to eventuate as anyone who may have seen Left Behind may attest to, although Cage’s award worthy turn in 2013’s Joe showcased once more that the man can seriously act.

Cage is absolutely a strange character, a man prone to bizarre public behaviour and even more bizarre movie appearances and for every quality turn there is a Wicker Man,Drive Angry or shudder Ghost Rider just waiting around the corner but one feels we haven’t yet seen the end of Cages acting high points, with the right project he may just one day appear once more in the end of year Awards circuits although some may still just be wishing that their favourite crazy eyed maniac had brought his antics to the suit of Superman way back when.

Once more as always is the case, this Top 10 Films list is not based on Cage’s performances alone but the movie as a whole so all judgements should go in line with this.

As with any John Woo film Face/Off comes with a pre-warning of over the top baked goodies, for as per usual things are totally unbelievable here yet utterly entertaining. The matchup of John Travolta and Cage works cheesy wonders on a typically irreverent 90’s action movie that’s perfect for those nights in with a pizza or two.

Does Cage sport a crazy hairdo? – No, just a few crazy eyed scenes.

The first fully fledged sign of acting life Cage has had in a leading role in quiet sometime, indie filmmaking golden child David Gordon Green elicits a fantastic turn from Cage and the rest of his cast and portrays an undiluted look into the harsh lifestyle of many country folk. A brutal and honest drama, you can read our full review here.

It’s a shame the Coen Brothers have never again teamed up with the wild eyed Cage for another bout of comedic shenanigans for if it were to be as mad-capped and entertaining as this late 80’s venture we’d all be in for a movie treat. Cage is at his entertaining best in this wacky caper that showcased many elements of the Coen’s that would later on be staples of their very successful career.

The presence of Scottish legend Sean Connery certainly helps with the pedigree of this action fest but The Rock is once more the perfect example of the late 90’s action fair that saturated much of the market at that time. From one liners, over the top violence and scenarios that don’t pretend to make much sense this is a great movie for all fans of movies with a care free attitude.

Does Cage sport a crazy hairdo? – No, surprisingly normal.

If you like you’re movies served with an entrée of strange, a main of weird and a desert of flat out insane then Adaptation is by far your meal of choice. A great insight into creative madness and the screen writing process, this Spike Jonze comedy is just the type of affair you’d expect from the man that gave birth to Jackass and Being John Malkovich and with a cast of seasoned veterans is an intriguing watch from start to finish and a great double-up of on form Nicolas Cage characters.

Does Cage sport a crazy hairdo? – Yes, some strange type of rug. 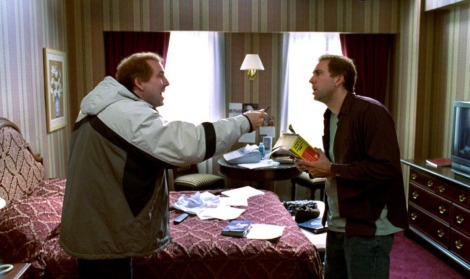 While we have already given air time to Con Air as one of our most guilty of guilty pleasure movies, there is always more room for mullet wielding Nicolas Cage’s and bonkers story lines. Con Air is downright ludicrous in its set up, but with solid direction from Simon West and with a cast of some of Hollywood’s finest having a blast this is rewarding B grade stuff.

Does Cage sport a crazy hairdo? – Yes, mullet for the win.

A cult classic almost the day after it was realised (and a predecessor to a tired follow-up) Matthew Vaughan’s energetic and original comic book adaptation is fresh, fast and furious and produced a Cage supporting turn that made many think he was back in business. An unquestionably controversial movie not for all tastes, this is however a fantastic example of what a comic book movie can be with a little creativity.

The movie that will forever be known as the venture that nabbed Francis Ford Coppola’s nephew a Best Actor Oscar, Leaving Las Vegas is a downbeat and effective drama that is for all accounts and purposes a showcase for the talent that Cage possesses when given the right material and forgoing the lunatic act for the sake of his art.

Does Cage sport a crazy hairdo? – Half and half, at times restrained, at others untamed.

A little seen gem from famed director Ridley Scott, this con man, OCD, family drama co-starring the always good Sam Rockwell is a dramedy of the highest order. Nothing overly unique occurs throughout this tale but with top notch acting, some understated yet appealing direction from Scott and with a nice story set-up, if you’re yet to see this low key movie you could do worse than to check it out.

Does Cage sport a crazy hairdo? – Half and half, sometimes cared for, other times unleashed.

Expertly directed by the underrated Andrew Niccol and well played by leads Cage, Ethan Hawke and the now super famous Jared Leto, Lord of War is the true life tale of Yuri Orlov and his gun exportation businesses that needs to be seen to be believed. From its killer opening through to its more sombre moments, Lord of War is a ripping tale that deserves to have more recognition than it gets.

Does Cage sport a crazy hairdo? – No, pretty businessman-like here.

This is the meaning of swagger, Cage owns the screen in Lord of War

How does this list rate compared your favourite “Sir Crazy Eyes” movies? Should there be a little more adventure in National Tressure or maybe some wacky Sci-Fi in Knowing? Let us know in the comments below! 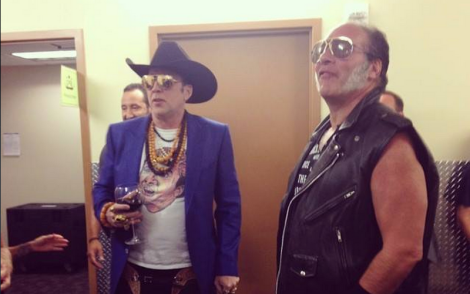 For more of our actor Top 10’s check out below –