Plot – Mild mannered Boston barman Bob Saginowski (Hardy) and his boss and cousin Marv (Gandolfini) find themselves caught up in a nasty situation with mobsters when money that they’re holding on behalf of them gets stolen in a robbery. To make matters more complicated for Bob, he has recently adopted an unwanted boxer puppy that sees him begin a friendship with emotionally wounded girl Nadia (Rapace), whose abusive ex-boyfriend Eric (Schoenaerts) is having a hard time letting go of.

“There are some sins that you commit that you can’t come back from, you know, no matter how hard you try. You just can’t. It’s like the devil is waiting for your body to quit”

It’s been quite some time since I’ve personally experienced a movie where the material has been elevated so much by a singular full bodied performance. In a tale that feels like it lives in a world we’ve been privy to countless times before, here being the working class neighbourhood of Brooklyn, The Drop becomes an unpredictable and intriguing package of pent up secrecy thanks to another stand out Tom Hardy performance.

Masking his short statured, yet physically commanding appearance under a raft of dirty worn in ski jackets and turtlenecks, a Brooklyn accented Hardy delivers one of his most outwardly mild yet internally layered turns as the anything but simplistic barman Bob Saginowski. Bob is the heart and soul of the Drop and a creation by writer Dennis LeHane (in his first screenplay) that allows Hardy to develop an at first glance easy to read everyman that becomes something else entirely as the films narrative progresses. To give more away about Bob and his mindset would be a disservice to a film that utterly relies on Hardy’s unmissable embodiment to survive as an entertaining film.

Belgium born director Michael R. Roskam, in his first English language feature, does an amiable job behind the camera that sees him capture the colds of Brooklyn’s streets in a fresh and interesting manner but The Drop doesn’t feel like the event if could’ve been thanks to some pedestrian pacing and otherwise un-noteworthy acting turns. This was, as many know, James Gandolfini’s last acting turn and sadly it’s not much of a turn, in what really is a more subdued version of his Tony Soprano character, while Sweden’s Noomi Rapace continues her long line of ill-informed Hollywood roles that in my mind has seen her become one of the most frustrating and irritating on screen leading ladies in some time. Her Nadia is an unlikeable and deterring presence on the film while fellow European recruit Matthias Schoenaerts sadly doesn’t fare much better, it is however nice to see Australian expat and Animal Kingdom breakout star James Frecheville in a small but important role. Where the Drop finds an element to match Hardy’s standing is in some of its finely crafted dialogue and plot developments, that for anyone familiar with Lehane’s work will realise are perfectly suited to his narrative tics, even though some twee elements such as Rocco the dog feel slightly misjudged.

As a fan of cinema for as many years as I’d care to remember, I must admit to being quite assured of my picking up of characters and what to expect from their behaviour and story so it’s with great joy that I can talk about the Drop being a film that blindsided me for the better part of its runtime and that is right down to the fact that once more I along with many others, am lucky enough to have bared witness to another expertly crafted Tom Hardy turn. Hardy is an actor that works on another level entirely to those that work alongside him and The Drop is elevated from its pedestrian like roots to something much more memorable thanks to his Bob Saginowski, the man that no one sees coming.

3 and a half casual limb wrappings out of 5 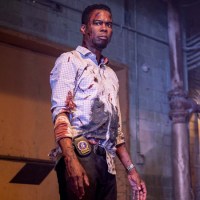