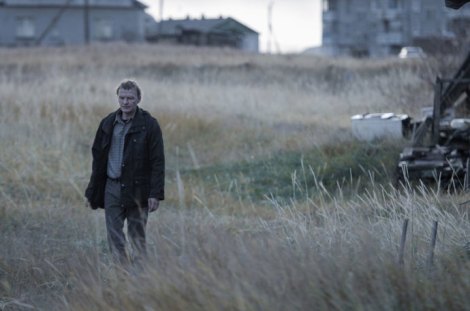 Plot – Struggling to stay afloat in a small Russian coastal village, Nikolay (Serebryakov) with the help of his wife Lilya (Lyadova) and old army friend turned lawyer Dmitriy (Vdovichenkov) must try and fight corrupt local mayor Mer (Madyanov) for the right to keep his home and family intact.

“Can you pull in a Leviathan with a fishhook, or tie down its tongue with a rope?”

Review by Eddie on

While it moves about as slow as the leviathan at the heart of its title reference, Andrey Zvyagintsev’s biblically inspired family drama is worth sticking it out for and while it doesn’t have the same impact as his highly thought of 2003 film The Return, Leviathan is a unique and troublesome picture that offers a unique look at Russian life and politics.

Loosely based around the Bible story of Job and his many trials, Leviathan is anything but an easy watch and in true Russian fashion, don’t go into this experience expecting happy or colourful endings as the path to this tale is fraught with danger, lies and coldly played tactics. Zvyagintsev is a master of mood and he embeds this stunningly well shot and hauntingly scored (Philip Glass provides the films sparsely used tunes) film with an ever ominous cloud of dread and while the film seems set on a certain direction within the first hour, things quickly turn in another way entirely when a fateful camping trip takes place between our films mains players.

What takes place between our traveling business/family man Kolya or Nikolay, his oppressed wife Lilya, their lawyer and friend Dmitriy and corrupt local mayor Mer is much better discovered as one watches proceedings take place and there are frequent moments where you feel someone is one up on another only for the narrative to twist conventions and while it remains slightly frustrating that certain questions remain largely under lock and key come the final scenes, Leviathan’s web covers a broad enough spectrum that has commentary on everything from the church system in Russia through to Vladimir Putin’s ever present figure being both a literal and figurative presence over the country.

Understandably recognised at film festivals the world over and awards ceremonies in equal measure (this really is the type of product Cannes and the Academy lap up) Leviathan doesn’t break any new ground or truly justify its nearly snail paced plotting but despite there not being much to actually love about this picture, this is a bleak drama filled with deeply unnerving moments which will make it a film you’re likely to ponder upon days after the final reels have played out.

3 ½ washed up whale carcasses out of 5