Director – Stevan Riley (Everything or Nothing)

Plot – A look at the life and times of Marlon Brando from his early breakthroughs in Hollywood, his life as a star of movies and his later time as a man struggling with his inner demons, all told by use of video footage accompanied by recordings that Brando had made himself speaking about his life and personal thoughts.

“No matter what I say or do, people mythologize me”

We’ve been extremely lucky over recent years with a plethora of fantastic and visionary documentaries on a range of different subject matters. From Man on Wire, The Act of Killing through to last year’s Virunga and Amy, documentary craftsmanship has really gone from strength to strength as filmmakers look at ways to tell stories and shine a light on their subjects in all new ways and Stevan Riley’s Listen to Me Marlon is quite possibly the first documentary of its kind.

An unquestionably fascinating look into not only the life but the very mind of legendary screen actor Marlon Brando, Riley and his crew had the rare opportunity to unearth boxes upon boxes of recordings that Brando himself had made through his entire career. These tapes range from confessionals through to self-hypnosis works but no matter what they’re labelled as there all an insight into the inner workings of a man that dealt from a very young age with inner demons and wants that Hollywood could not heal.

For any fan of Brando or really any fan of movie history, Listen to Me Marlon offers a once in a lifetime like chance to hear the game changing method actor speak openly about his life as a kid, as a budding star, as a reclusive island wanderer and later in life a man that held many regrets and unfortunately found himself apart of a number of tragedies that clearly affected his life unmeasurably. Some of the most fascinating and open revelations we hear from Brando include his thoughts on acting as merely a means to be able to live his life and his deep love for the island of Tahiti and how he saw that as a place that showcased the best of humanity.

Listen to Me Marlon is a fabulously constructed documentary and while it would’ve been nice in a way to hear from others involved in Brando’s life what better way to hear about his story is there than hearing from the man himself? An historic figure of depth and emotional nuances, Listen to Me Marlon is a must watch for any fan of cinema and easily one 2015’s best documentary features.

4 scanned talking heads out of 5 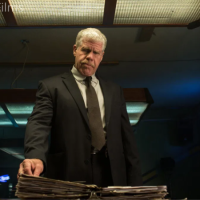