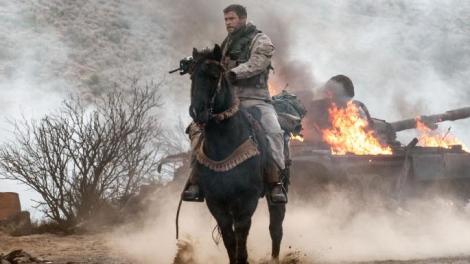 Plot – The true story of American Special Forces squad the Green Berets who led by their leader Captain Mitch Nelson (Hemsworth) deployed into Afghanistan in the wake of the September 11 attacks in hope of overthrowing the Taliban to pave the way for a more full-scale follow up attack.

Based on a little known true story and no doubt exaggerated for the Hollywood machine, 12 Strong is an effective war film and a solid debut feature from director Nicolai Fuglsig who delivers an experience that is engaging without becoming anything overly memorable as Thor himself heads into the battlegrounds of Afghanistan to take it to Al-Qaida in the wake of the September 11 attacks in 2001.

Focussed around Chris Hemsworth’s Captain Mitch Nelson and his 11 man squad that includes Michael Shannon’s Hal Spencer and Michael Pena’s Sam Diller heading into the war torn Afghani landscape mere days after the attacks on American soil and tasked with completing a highly important mission of support to a local militant whose looking to wipe out the terrorist threat in the country, 12 Strong gives Fuglsig and his cast ample chances to get involved in some explosive and intense battles as their horse filled entourage take it to the “big bads” and try clear a path towards liberation.

Those seeking a fix of war infused thrills and spills will be left satisfied by the experience 12 Strong has to offer them as Fuglsig director handles the carnage and intense battles well as the bullets, RPG’s and bombs fly across our screens and for a film with a somewhat limited budget, Fuglsig makes the most of the tools at his disposal to give the film a sense of danger and fierceness, even if there are a few too many scenes of our heroes flying headfirst into battle as countless enemies spray bullets everywhere but at them.

Where 12 Strong isn’t so strong is in its ability to connect us with this particular group of men and while Hemsworth and militant leader General Dostrum (played well by Navid Negahban) get decent set-ups and screen time, Fuglsig can’t quite invest us more emotionally into the bond and backgrounds of the tight-knit Green Berets squad.

The best war films manage to mix both the shock and awe of battle with the human ties and that’s what differentiates 12 Strong from the leaders of the pack, despite its ability to capture the time and place of this story in a constantly capable way.

12 Strong offers up a solid if unremarkable war-set experience that features some above average battles and big screen spectacle but some unfortunately lacking human connections.