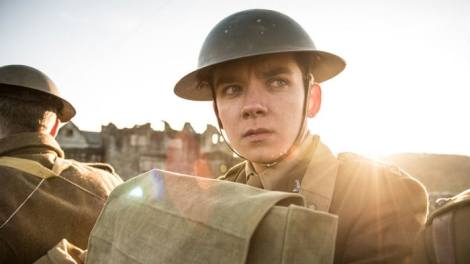 Plot – Set in the dugouts of Aisne during World War 1, mentally tormented army captain Stanhope (Claflin) tries to maintain his men’s morale as they look to battle an impending German assault.

“Every little noise up there makes me feel sick”

Based on R.C Sherriff’s 90 year old play of the same name, Journey’s End successfully adapts the playwrights tale of a few days in the life of a British battalion in the muddy dugouts of 1918 Aisne during World War 1, as the German forces creep ever closer to their precariously placed defences in the shadows of the later stages of the great war.

A grimy and intentionally grim war film that makes the audience a member of Sam Claflin’s mentally deteriorating Captain Stanhope group of soldiers that are stationed in an increasingly dangerous position at a never worse time, Saul Dibb has assembled quite the cast of recognisable British actors to bring Sherriff’s work to the big screen.

Featuring alongside Claflin in roles of various importance are the likes of Paul Bettany, Asa Butterfield, Stephen Graham and Toby Jones and all actors acquit themselves well in roles that would’ve benefited greatly from further development and insight, yet it’s a joy to see the likes of esteemed character actors like Graham and Jones interact with each other, even if you do feel like you could’ve spent more time getting to know these brave men and what makes them tick.

It’s the biggest problem with Saul’s carefully plotted and rather stationary film (we rarely get a reprieve from the trenches, showcasing the films stage roots) as we never gain a fully-formed insight in these men that were risking so much enacting on their duties and while scenarios are referred to briefly such as Stanhope’s pre-war friendship with Asa Butterfield’s bright-eyed new officer Raleigh or Stanhope’s bond with Bettany’s second in command Osborne, there’s nothing delved too intently into character wise by Dibb and it makes it hard for Journey’s End to connect on a high emotional level due to this fact.

The great war film’s of years past have all shared a common connection of strongly formed character’s and brotherhood’s that feel palpable and real and that’s something Journey’s End fails to do despite its many other fine elements.

A gritty and unflashy World War 1 tale, Journey’s End is a film of good intentions and many a fine moment but Dibb’s adaption of Sherriff’s famous work is lacking in heart and soul, making it a disappointingly cold yet always watchable examination of an intriguing subject matter.

3 freshly delivered chickens out of 5