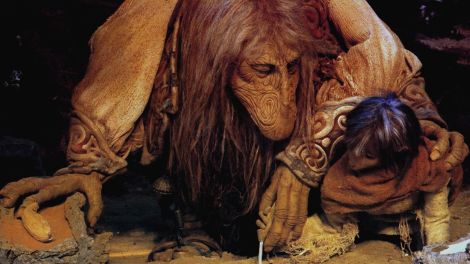 Plot – On a mysterious planet ruled by the brutal bird-like Skeksis who draw their power from a mystical crystal, young Gefling Jen (Garlick) sets out on a perilous journey to stop their nefarious reign and restore peace to his world.

“Oh, Master, nothing is simple anymore”

I’ve admitted to a few cinema sins over the time and one of them that I can now safely take off the list is I’ve never seen 1982 puppet masterpiece The Dark Crystal.

A film that’s reputation has only grown over the years, so much so that Netflix recently released the next chapter in the Crystal universe in August with Age of Resistance, Jim Henson and Frank Oz’s fantastical puppet-filled adventure is one of those films that has a unique and lived in charm that is impossible to fake and while it lacks a little nuance and falters on its way to its end goal, this mostly hand-made and artistically wondrous creation is a whole lot of fun to watch.

Centred around Jen, a young Gefling (an odd human like creature) whose thrown into a dangerous mission to track down a part of a powerful crystal that is currently under the control of the evil birdlike nasties known as the Skeksis, who have taken over the land and plot to destroy any good thing left, Crystal is your typical everyday hero on a mission type set-up with a very 80’s dark tone that would’ve been enough to scare its fair share of children back in the day but thanks to the imaginative world the story takes place in and the painstakingly detailed puppets at its core, Henson and Oz’s feature is worth watching for this aspect alone.

While the advancement of CGI and technological wizardry has allowed film-making to evolve and stun audiences more and more in the years after 1982, there is something timeless about a creation like Crystal that would’ve taken countless hours of blood, sweat and tears and more than its fair share of creativity to bring to life and while at times things feel outdated and a little haphazard, there’s a lot about this cinematic treasure that can be enjoyed.

Crystal is the type of film that can only come about due to passionate and driven filmmakers and over a long standing career its exactly what Oz and Henson proved to be as the two filmmakers went on to be apart of some of the most beloved and well-known properties of the 80’s and 90’s and their spark of imaginative prowess has no doubt inspired a large collection of artists, dreamers and cinema masters over the last 30 years, people who would’ve watched Crystal as a young and impressionable soul and taken away by what they were seeing on the screen in front of them.

It’s the type of unquantifiable aspect of a film like Crystal, that while flawed and certainly not even close to the best of the best of cinematic classics has no doubt created a lasting legacy that will never die and helped foster and unearth other glorious creations that just so happened to be bought to life thanks to a bunch of puppets and some very angry crustaceans that came to be in the early 80’s.

There are aspects of The Dark Crystal that leave a lot to be desired but this creative and artistically appeasing adventure is deserving of its reputation and a perfect example of how artistry can be used to tell stories and inspire through its creativity.

3 ½ interrupted musical jams out of 5

Musings of a Grouch

The insane ramblings of Chris Scott

Movie Reviews with yours truly

This Nerdy Girl Does

Sci-Fi Bulletin: Exploring the Universes of SF, Fantasy & Horror!
Lioness at Large
A Certain Point of View, Too