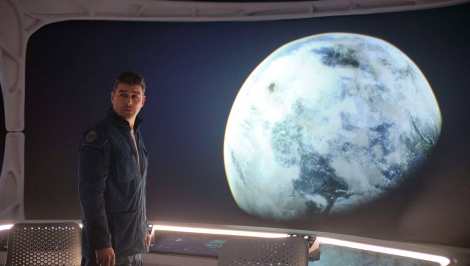 Plot – Arctic based scientist Augustine (Clooney) is the sole operator of his base in the aftermath of a global catastrophe but finds company in communicating with a returning spacecraft that is headed back to Earth from a research mission to a far away planet.

A once promising directing career that started off well with cult film Confessions of a Dangerous Mind and went from strength to strength with the Oscar winning Good Night and Good Luck, George Clooney’s stints behind the camera have petered out significantly in the years since his first two films with misfire comedy Leatherheads, wannabe Oscar baiter’s The Ides of March and The Monuments Men and the dire Suburbicon all painting a picture of a career as a director that was and still is in serious dire straights.

Not helping this situation in the slightest is Clooney’s latest venture behind the camera, the Netflix backed The Midnight Sky, a film that also see’s him dial back the kilos and grow an impressive old man beard to play the leading role of sickly Arctic scientist Augustine Lofthouse in this sombre and dull sci-fi drama that squanders a potentially exciting and thrilling affair as it progresses along its self-important road.

Visually Sky is one of Clooney’s most intriguing films yet (got to use that Netflix money somehow), with ample space action and some stunning CGI shots of a snow blasted landscape or outer space rubble events but these visually appeasing occurrences throughout the film are relatively few and far between and fail too make up for Clooney’s mostly lifeless direction and character building that makes you wonder very early one why you should care about anyone or anything going on in this supposedly deep thinking tale.

Covering three separate plot lines that includes Lofthouse trying to do his job in the midst of a global catastrophe, Felicity Jones astronaut Sully and her crew who are returning from a multi-year mission of exploring other planets for civilisation and a dalliance back in time when Lofthouse was nothing but an upstart scientist with grand ideas, Sky struggles to balance all its various components, that portrayed properly could be compelling and gripping but here are nothing more than bores that at times skew far too much into mawkish territory to sit well (here’s looking at you space repair singalong).

Perhaps most pressingly for the film and working to help its eventual quick detriment is the wasting of its talented cast.

Clooney is gruff and uncharismatic as Lofthouse, Jones is given very little too work with in here space screen-time and supports like the talented David Oyelowo and Kyle Chandler may well have not shown up as the likeable performers all get drowned out by a dreary production that never appears to fully comprehend what it wants to be or what it wants to say to its audience.

A dull Netflix offering that is but a further painting of the picture of Clooney’s failing career as a director, The Midnight Sky is a mismanaged attempt at human focused Sci-Fi that even the most hardcore of genre fans will find hard to enjoy.