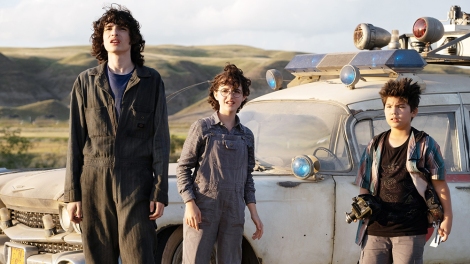 Plot – Moving into a rundown farmhouse, single mother Callie (Coon) and her children Phoebe (Grace) and Trevor (Wolfhard) discover links to legendary Ghostbusters as they battle a nefarious force present in their community.

“Hey remember that summer, when we all died under a table?”

Before we go any further and the pitchforks or proton packs come out to get me, just know that I understand why so many long-term fans have found joy in the long delayed and seemingly cursed Ghostbusters: Afterlife.

Directed by original director Ivan Reitman’s son Jason, Afterlife provides an intense and almost non-stop barrage of nostalgic throwbacks and winks to the beloved ghost infused brand and for those that are wanting their memories of past times of bygone eras tickled in all the right ways I am sure Reitman’s big-budgeted ride is exactly what the doctor ordered, unfortunately when one removes the nostalgia provide from the equation, Afterlife is a poor excuse of a standalone film that will surely fail to be remembered in the years to come.

To be bluntly honest about the Ghostbusters brand as a cinematic property, there’s only ever been one true and undeniably entertaining big screen event which is the 1984 original, with its so-so 1989 sequel and the instantly forgettable 2016 female centric entry far from great additions to a series that has remained popular throughout the years without ever doing much continual work to justify its popularity all these years on.

Getting stuck straight into the action, Reitman wastes little time in thrusting his audience into a whole new world of ghost-busting, as a mysterious farmer falls afoul of some ghouls which leads to Carrie Coon’s single mother Callie and her teenage kids Phoebe and Trevor (played by Mckenna Grace whose the films true lead and Stranger Things Finn Wolfhard) taking residence of the farmer’s property only to find things are not as they seem in their new small Oklahoma township.

Very much inspired by the 80’s era of kids own adventures and the Stranger Things brand that has taken over the world in the last few years, Afterlife tries hard to mix in the old with the new but detrimentally to the film, it lacks any genuine comedic moments or infusion of memorable wit and while Mckenna Grace battles valiantly and Paul Rudd as her science teacher Mr. Grooberson does what Paul Rudd does, there’s no real charm to Afterlife’s by the numbers and generic offering which does little of its own work as it instead relies on past glories to cover up its deficiencies.

Seemingly existing for no other reason than to rehash the best moments of Ghostbuster’s past, right down to repeating villains, ghosts and jokes, Afterlife could’ve mixed in the old with some inventive new but as it stands, it does nothing to suggest it exists for any other reason than to remind us all of how good the old days were, an endless procession of nostalgia inspired moments in place of creating an actual decent film.

Sure to find its share of fans across the world and likely to please those that can forgive the film from failing to provide any new laughs or new ideas, Ghostbusters: Afterlife had all the tools at its disposal but forgot to find the magic to make something worthwhile.