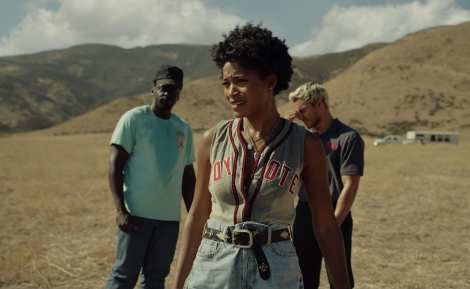 Director – Jordan Peele (Get Out)

Plot – On their quiet horse ranch in the Californian plains, brother and sister OJ (Kaluuya) and Emerald Haywood (Palmer) begin too suspect their serene surrounds are playing host to a chilling mystery.

If it wasn’t already abundantly clear after his first two feature films Get Out and Us, Jordan’s Peele’s third feature as a writer and director Nope proves once and for all that the comedian turned filmmaker is not at all intent on chasing the low hanging fruit when it comes to delivering fresh and unique films.

A film that for a long time was shrouded in the type of secrecy normally reserved for a Christopher Nolan film, Nope slowly revealed itself to be some type of sci-fi/horror hybrid that may or may not be an alien invasion movie but without spoiling any of the surprises that lay in store for those heading into the film for the first time, Peele’s version of what is perhaps to be expected from a certain type of film is unlikely to be what audiences are expecting, with Nope becoming anything but a typical big budget blockbuster event.

Teaming up with renowned cinematographer Hoyte Van Hoytema, Peele and his right hand man take us into the Californian area of the Agua Dulce where sibling horse farm owners OJ and Emerald Haywood begin to suspect that something is amiss on their usually quiet property, with the prospect of an unknown entity making itself at home in their surrounds causing the mismatched duo to enact a plan to uncover the mystery of what may or may not be present in their lands.

Taking a typically slow-paced approach to proceedings much like he did with Get Out and Us, the plotting and style in which Nope’s story unfolds will not be for everyone and despite an unnerving and eye-opening pre-credits sequence of events taking place, Nope is in no rush to get the ball rolling when it comes to big money shot segments or major plot developments but there’s a chilling and mysterious tone at the core of every one of Nope’s runtime minutes that makes it a gripping watch for the most part but one that never manages to fully capitalize on its many great ideas and moments, that culminate in a unique but not exactly satisfying final stretch.

Neither a genuine science fiction experience nor a straight up horror exercise, Nope holds within it some of the most interesting ideas and scenes (extended scenes held around a western theme park audience/a chimpanzee named Gordy and a bloody incident at the Haywood’s farm clear standouts) you’re going to see in a film this year but at times it’s hard to fully comprehend what Peele is trying to achieve with Nope’s overall messaging and the purpose behind it all outside of an examination of mankind’s inability to understand its powers in controlling things we have no right to control, with the visually appeasing but messy final act leaving Nope feeling like a film with great parts but not such a great all-round package.

Three films in it still feels as though Peele’s greatest feat yet as a director is till too come with all of his final products harboring incredibly realized moments and more unique ideas than countless other films could dare to conjure up but while Nope is a cinematic spectacle and another tick for the industries new wonderkid, there’s still a few too many missteps to classify it as a masterpiece despite at times reaching that level of justified praise.

An entirely unique cinematic and narrative experience, Nope is another worthy effort from Jordan Peele but one that doesn’t always come off the way in which we would’ve hoped, holding it back from the greatness that lays within arms reach throughout.