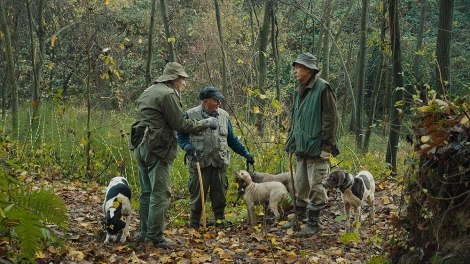 Plot – A documentary following the exploits of a collection of elderly men in the Piedmont area of Italy that have dedicated their lives to the hunt of the mysterious and sought after truffle.

“How many truffles does he need?

One of the most gentle and softly spoken documentaries you’d care too see, directors Michael Dweck and Gregory Kershaw explore the mysterious and unique world of truffle hunting in Europe by planting their cameras and letting the characters of this world take centre stage as they set about to find the biggest and best truffles imaginable.

Featuring a colourful bunch of characters, many who are far too old to be traipsing around in the forests that are strewn across the countryside of the Piedmont region of Italy, The Truffle Hunters never bothers too deep dive into either the backstory of our central figures or the history around the whole song and dance that accompanies the truffle industry but despite the frustration of there feeling like a lot is left unexplored or barely considered, it’s hard not to enjoy taking a seat and enjoying the scenes laid out in front of us.

Beautifully captured by Dweck and Kershaw, with many of the films scenes framed in a way that would make them painting/picture worthy in their staging and set-up, The Truffle Hunters is the cinematic equivalent of a leisurely stroll through a picturesque environment and when you have such charming company as this documentary provides, the experience may not be life changing but its goodness is palpable and it’s hard to think of a more nutritious documentary from recent memory.

Keeping us at arms length from delving too deep into the motivations, history or circumstances that have made The Truffle Hunters real life cast the wonderfully colourful lot that they are, this documentary proves once more that for all the cinematic characters created for the big screen over the history of cinema, there’s still nothing quite like being able to spend time with real life figures that have all their own eccentricities and ticks that need to be seen to be believed and if there’s anything more humorous and heartwarming than witnessing an 80 plus year old sneak out of his window at night to go on a stroll through the woods so his partner doesn’t catch him, I would personally like to know what it is.

There’s a sense that The Truffle Hunter’s could have deep dived further into its characters and subject matter but there’s no denying this is a simple and satisfying documentary that is sure to leave a smile on your face.