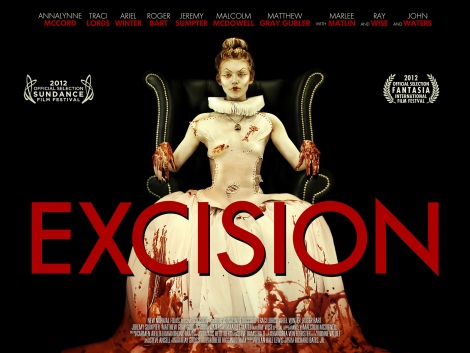 It has been almost a year since first seeing Richard Bates Jr.’s astonishing Excision, but due to how hard it is to articulate ones thoughts on it, I haven’t attempted a review until now. Usually I’d list films that it compares to, however nothing comes to mind… it’s a blood soaked, subversive, divisive cult extravaganza that’s as shocking as it is beautiful to witness.

It’s fitting that ‘Excision’ means removal, or cutting, and that this stunning film is so far removed from its peers it’s frightening.

The story is that of Pauline (AnnaLynne McCord), a troubled 18 year old distanced from her upright family and the suburban way of life, with dreams (delusions) of becoming a successful surgeon. He mother (a fantastically restrained Traci Lords) wishes her to be more like her polite, feminine younger sister, Grace (Ariel Winter), who tragically suffers from cystic fibrosis, her father is without a backbone and by eventually slamming a classmates face into a locker she finds herself expelled from school. Oh, and she is obsessed with blood, and the vivid dreams she has on a regular basis paint an outstanding picture of her unique, and possibly disastrous psyche.

Needless to say, McCord (known mostly for her roles in TV series Nip/Tuck and 90210) is outstanding and controls the viewer’s gaze, not an easy feat in a film also featuring performances from the king of trash John Waters and cult icon Malcolm McDowell. Richard Bates Jr. in his debut directing effort proves equally critical in Excision’s success, handling both dream and the more bleak reality components of the story with the precision of a surgeon Pauline wishes to become. I suppose its natural at this point for genre connoisseurs to point out similarities to the recent (though not as original) American Mary, but I assure you they are as opposite in tone as the films of Paul T. Anderson and Paul W.S. Anderson.

Sometimes a film arrives that truly defies categorisation and rejects logical analysis; Excision is one such film. I’m sure that there are people who felt completely underwhelmed after the unanimously positive buzz it gathered upon release, citing a lack of significant plot events or scares to render it horror or even thriller. ‘Drama’ is the broadest of film genres, and its possible that somewhere among its vast annals is where this future classic sits.

Since I’m a little short for words, I’ll quote what renowned film critic and author Kim Newman so glowingly stated: ‘Writer-director Richard Bates Jr.’s debut feature is one of the most extraordinarily odd, impressive films of the year, riffing on teen and horror conventions, showcasing remarkable acting and telling an affecting, shocking story with precision and wit.’

5 John Waters cameos out of 5