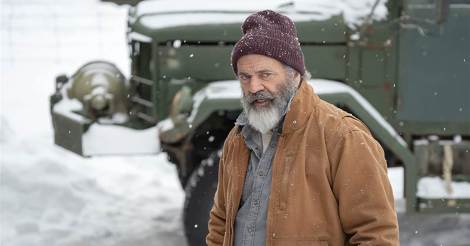 Plot – Angry with his lump of coal for Xmas, young boy Billy (Hurstfield) employs the services of Skinny Man (Goggins) to track down Santa (Gibson) and end his life for good.

“You think I got this job because I’m fat and jolly?”

Just when you thought 2020 couldn’t possibly get any weirder, along comes Fatman to make you realise once more that this is the year of the unexpected.

The film no one asked for and the film that absolutely didn’t need to be a thing, Fatman see’s grumpy Aussie icon/villain Mel Gibson become Chris (aka real life pistol shooting Santa!) whose not only battling a problem to stay in business thanks to kids these days being naughty rather than nice but Walton Goggins St. Nick hating Skinny Man, whose been employed by Chance Hurtsfield’s little brat Billy who wants Santa dead after he delivers him some coal for Xmas.

It’s an utterly bizarre set-up that in an even odder turn of events is played almost entirely straight by its cast and directing duo Eshom and Ian Nelms, who instead of letting their tale run rampant into black comedy and accept its idiotic narrative, choose to instead make sure Fatman is a straight faced incarnation of an Xmas movie that feels like a distant cousin to Bad Santa, sans jokes and overweight red heads.

There’s funny little moments in the film, Walton Goggins is going for it and his Skinny Man’s hatred for Santa and kidnapping of science fair winning children needs to be seen to be believed, while mostly unexplored issues with Santa’s elves and contracts with the military signal moments the film might’ve been able to really make things click into gear but a huge portion of the Nelms film feels like its only ever half-baked at best as its relatively by the numbers plotting takes hold.

You can’t help but feel disappointed by the fact that this bizarre oddity didn’t manage to milk (and cookies) more out of the central concept of a grizzled Santa and Mrs. Clause fighting to remain viable in an ever changing landscape while its underutilized use of some game leading men makes you feel frustrated that the material they were working with wasn’t able to maximize their commitment.

As good as his been in years (not as though that’s saying much) Mel Gibson appears to be having a lot of fun here under a significantly bushy beard and he against all the odds makes for a Santa you want to see more of while Goggins is doing a variation of his Vice Principals persona here that has made him a recognizable and reliable face when it comes to off-kilter characters that appear to be on the serial killer spectrum of human personas but they don’t get much time together in the films brief 90 minute runtime, while there’s a sense they’re both never really given killer moments to work with in the film.

There was potential here for Fatman to be a pitch black Xmas comedy classic yet while it has brief moments of surreal goodness, its insistence to play things straight and eschew big laughs hurts its chances of achieving anything of a lasting nature despite its game leading men.

2 pistol wielding Santa’s out of 5 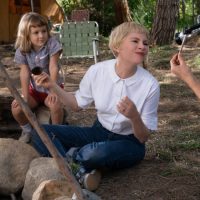