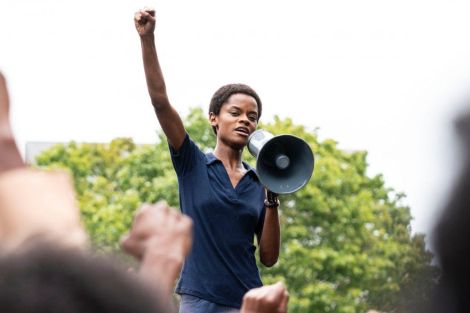 Plot – The true story of the Mangrove 9, a group of black protestors who clashed with police during a so-called riot in 1970’s London and whose trial made national headlines in the day.

As part of a BBC initiative that has lead to support stateside through Amazon: Prime, the Small Axe series has allowed Academy Award nominated director Steve McQueen a chance to explore five separate stories of West Indian immigrants to the UK in the 1960’s and 70’s with the series kicking off with a bang with the first installment titled Mangrove.

Based on the true story of the Mangrove 9, a group of black citizens in London who were unfairly charged with serious offenses relating to riot and affray when a protest they were a part of descended into chaos due to police interference, McQueen’s first effort under the Small Axe banner is a powerful and humanistic tale that is relevant in today’s climate and features some awards caliber performances from its leads Shaun Parkers and Letitia Wright.

Never once feeling like a made for TV production, McQueen embeds Mangrove with the same power and poignancy that he made his name with in films such as Shame and 12 Years a Slave and without ever beating his viewers over the head with heavy handed delivery, his film paints and insightful picture of a time and place in Britain’s history that is filled with humanistic moments that both shatter your spirit in humankind and uplift it as the films central figures wade through an horrific ordeal to clear their names.

A long-term player in the industry both at home and abroad, Mangrove gives Shaun Parkes the role of his career as immigrant and new restaurant owner Frank Crichlow, a man whom local police have targeted unfairly throughout his desire to operate and run a legitimate business and Parkes excels throughout the film with a combination of intense final scenes in the film some of the best acting you’re likely to witness this year, on a screen both big or small.

As well as McQueen’s typically in tune direction accompanying Parkes fine central turn, Marvel star Letitia Wright proves she has what it takes to be a key player in Hollywood for years yet to come with her passionate turn as Black Panther member and outspoken black advocate Altheia Jones proving to all that there’s more to the young performer than Shuri.

With such fine performances and careful and considered direction, this longest edition to the Small Axe series is potentially its finest and one of the years most powerful and relevant tales.

An important piece of storytelling for the time and place we find ourselves in at the moment, Mangrove is a fiery beginning for the Small Axe anthology and further proof that McQueen is one of the great directional talents working today.

4 street parties out of 5