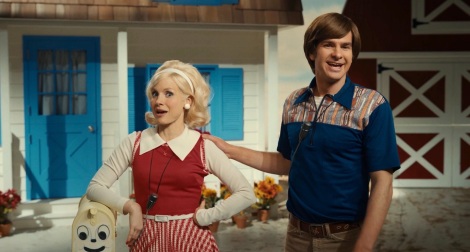 Plot – An examination of the rise and fall of famed televangelist Tammy Faye Bakker (Chastain) who alongside her husband Jim (Garfield) created a global phenomenon that etched their names into the history books.

“You keep on asking for more, with that whining, grating Betty Boop voice!”

Coming and going without much fanfare upon initial release, there was a general consensus that Tammy Faye Bakker biopic The Eyes of Tammy Faye was an inoffensive if unremarkable and unfocussed drama with some great central turns but as awards season marched on the drums started beating louder for its lead Jessica Chastain, who after years of solid work has now found herself winning this years Best Actress award for her transformative turn here as the famed American televangelist.

Also winning another Oscar for the films impressive make-up work, Michael Showalter’s film has done well to add some notable awards to its trophy cabinet and it can count itself lucky that it managed to snare the services of Chastain and the never hotter property than he is now Andrew Garfield as Tammy’s husband and business partner Jim Bakker as the two leads ensure that while Showalter’s film goes through the motions without much inventiveness or noteworthy moments, their performances will have you often sitting back and taking hold of some of the best acting work seen in the last 12 months.

Both larger than life figures that many would feel were too over the top if they were born out of someone’s mind not the history books of real life characters, the Bakker’s lived an unbelievable life as America’s most watched and recognizable TV preachers and Christians in the 80’s and early 90’s and their story is one that needs to be seen to be believed but Showalter struggles to juggle all the various elements that were present in their rise and fall and often the film feels like merely a progression of scenes rather than a gripping whole but at all moments its leads remain impressively on song through all the ups and downs of the Bakker’s lives.

A fine addition to his work in the Oscar nominated Tick Tick…Boom and Spider-man: No Way Home, Garfield’s 2021 body of work was certainly something to write home about but despite his solid turn here Eye’s really is the Chastain show as the well-liked actress hits a home run bringing a tricky and sometimes downright unlikable human to life on screen.

Nailing the “Betty Boop” voice, the Diet Coke loving mannerisms and traits and becoming at times unrecognizable as the make-up clad lost soul, Chastain is one of the most deserving Best Actress winner’s of recent memories and while its a shame the film she’s in is so mid-tier and unmemorable, her turn is anything but and feels like a culmination of years of hard work for the actress who at times has had fine performances lost in the Hollywood system but her shines front and centre as a woman with a seemingly kind heart but a strange way of showing it.

There’s nothing at all remarkable about The Eyes of Tammy Faye in many regards but its two central performances lead by a never better Jessica Chastain make this biopic worth tuning in for.