Plot – A loner hoarder known only as Hungry Man (Ambrose) awakes in the middle of the night craving a BBQ chicken, leading him to extreme lengths to get his fix.

It’s a simple seeming quest for Connor Ambrose’s lone hoarder but driven to excessive screaming, salivation and a one track brain that can but fathom locking lips around a juicy piece of poultry, getting his hands on a freshly cooked chook is only the start of the madness that Johnson revels in as his garbage-filled short film takes Hungry Man and us as an audience on a quick trip to the realms of insanity.

Inspired by the likes of Eraserhead, Gummo, Bad Boy Bubby and Pink Flamingos, with a wish to create an uncomfortable viewing experience for audience members, something achieved here through some impressive editing and sound design from crew that includes Lucas Stanton and sound designers/engineers Anders Keys and Andrew Gambell, Chicken certainly achieves its goals in many respects and one suspects that Johnson and his collaborators have more dark stories to be told in the near future should they wish to combine forces once again.

Barely containing dialogue throughout its 17 or so minutes of runtime, with more chickens deliriously ripped apart and swung from a hook that meaningful conversations undertaken, Chicken is far from your typical film, whether it’s being compared to other short films or feature films and it’s unlikely to go down smoothly for all viewers but on a quest to give viewers something bizarre and in the right eyes wonderful, Chicken is a unique experience that will definitely ensure something other than its titular bird will be on the menu for dinner.

A short, sharp but never the less wild ride into the mind of a chicken craving madman, Chicken is a gonzo Australian short film that is all but guaranteed a cult following in the months and years too come.

Find out more about Chicken HERE 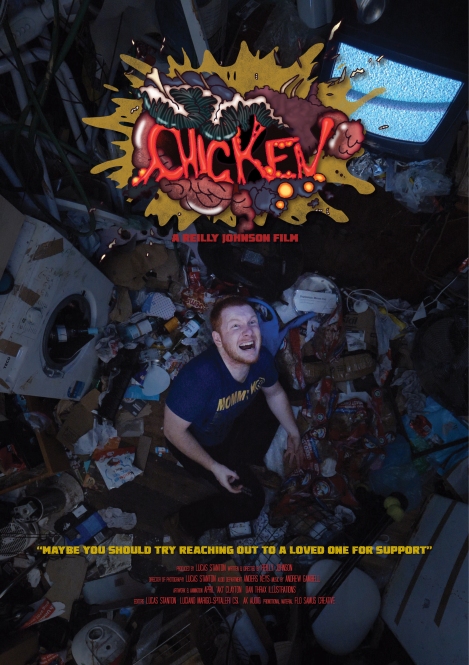